Just when I thought the censorship couldn't get any worse...


As of Monday, April 27th, 2015, all of my attempts to post "active" Twitter (@scrivener50) links to my articles at VicLivingston.blogspot.com have been blocked and, according to an on-screen pop-up, "flagged as suspicious".


Warning: this link may be unsafe
http://fb.me/1Re6YduJo
The link you are trying to access has been identified by Twitter or our partners as being potentially harmful. This link could lead to a site that:
Back to previous page

Learn more about unsafe links
Ignore this warning and continue

The "warning" is bogus... a fraud... a lie.  No reader has ever reported any malware problems with this site, and there's no evidence to support the claim that this site "may be unsafe". This is nothing less than a fraudulent attempt to sabotage and censor my journalism.

It's quite apparent that my cyberNazi censors -- Lockheed Martin cyber unit military contractor operatives and/or military psyop (psychological operations) agents -- once again have resorted to ham-fisted censorship and smear tactics. These government agents do not play by the rules. For all intents and purposes, they have declared cyberwar on this journalist. I am the victim of a state-sponsored character and career assassination campaign that began over a decade ago and just keeps getting more brazen, more thuggish.

Why are these fratboy cyberNazis so bent on silencing this particular journalist?  Because I have exposed a nationwide program of covert electromagnetic radio frequency weapon torture, subjugation, neutralization and slowkill genocide of "dissidents" and "undesirables". This American genocide is administered by agencies and commands of the U.S. military-intelligence-corporate complex -- chief among them U.S. Cyber Command; military "M.I.S.O" psyops units; and their prime cyber-contractor, Lockheed Martin.

The "program" also entails pervasive, 24/7 surveillance; censorship and tampering with telecommunications; and unrelenting community-based harassment; so-called "gangstalking"; criminal home intrusions and vandalism; and covert financial sabotage.  I have written extensively about this below-the-radar American Gestapo in a series of articles published on this website and previously, at the now-defunct NowPublic.com (my NowPublic articles are largely inaccessible to me, and presumably, to anyone else).

The radio frequency weapon assaults have degraded and debilitated my health and well-being and have hideously mutilated and disfigured my body. I have been damaged in some of the worst ways that a man can be damaged. I cannot leave the house without being stalked, store-mobbed and cat-called. When I return home I often find signs of surreptitious entry and malicious vandalism of property and personal items like clothing. We have been victims of identity theft and financial fraud. The local police chief in Lower Makefield Township, Bucks County PA, where my family has resided for nearly 25 years, has given me lip service in two personal meetings, but no relief from persecution. His department either cannot or will not respond to complaints of hate crimes, home intrusions, financial sabotage, foul-tasting drinking water and apparent tainting of bottled water stored in our garage.

We have been slandered to neighbors as "troublemakers", in the words of one harassing neighbor, and we are serial targets of town watch vigilantes who parade by our house on foot and tailgate in cars, often waving maniacally.

It's been eleven years and counting of living hell, and I am not alone. Local police, operating under the apparent direction of regional "fusion centers" -- an extrajudicial Gestapo apparatus -- act as the virtual jailers of extrajudicially "targeted individuals" nationwide, persons who most often are persecuted for their beliefs, their activism, their ethnic and religious backgrounds, not because they pose a "threat" to the community.

America has transmogrified into a fascist police state lorded over by ideologues and haters; the dwindling number of "good guys" in law enforcement either go along with "the program" or find themselves, and their families, added to the control matrix targeting list.

So this is about much more than being censored on Twitter; this is about the descent of America into a genocidal fascist hell on earth for resolute citizens who refuse to surrender their God-given and constitutional rights to fascists and thugs.

America can still be saved. But only if its leaders and citizenry wake up to the real threat within -- ideologues and haters who make a mockery of the U.S. Constitution and traditional American values.

The covert internet censorship regime administered by Lockheed Martin for U.S. Cyber Command and other elements of the mil-intel-law enforcement complex continues to use social media site "terms of service" as a pretext under which to impose draconian content censorship on American citizens -- notably those who have been extrajudicially condemned as "dissidents" or "undesirables". 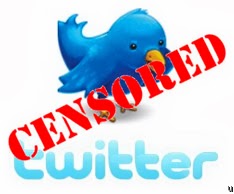 The apparent motive, in my case: to keep me from using Twitter to disseminate links to my articles that expose covert U.S. military-intelligence domestic neuroweapon attacks on thousands of mostly unknowing American citizens, along with secret programs of financial sabotage and other civil and human rights violations, including serial community persecution commonly referred to as "gangstalking".

This veteran journalist's latest encounter with this cyberNazi apparatus began precisely at 12:07pm on Friday, Feb. 27th, immediately after I posted a tweet on my Twitter page that referred to potential GOP presidential candidate Jeb Bush as an "elitist". The tweet did not post. Instead I instantly received a pop-up box message that read: "Your tweet has been flagged as suspicious". All subsequent attempts to post on Twitter elicited that same message, or a alternate notices stating: "This appears to be automated...." Later the notice morphed into: "(T)his request looks like it might be automated. To protect our users from spam and other malicious activity, we can't complete this action right now. Please try again later." I tried, repeatedly -- to no avail.

My account was not totally blocked or rendered invisible on the net, as might have happened if Twitter itself, and not a rogue censorship regime, had cited my account for violations of its posting policies. I continued to receive new tweets. But all of my attempts to post were thwarted by the pop-up roadblocks.

This was nothing new. It's happened many times in the past. But the ham-fisted technique had become increasingly infrequent after I published this article exposing many of the methods and tactics of a censorship regime I first began to expose more than five years ago:


While the pop-up blocks didn't return with a fury until Feb. 27th, I have noticed that my tweets often contain spelling and other errors that were not present when I hit the "post" button, forcing me to delete and re-post.  That fact apparently is being used to supply "plausible deniability" to the cyberNazi censors who then send messages to me about "automated" requests -- in other words, a false pretext under which to censor.  it's painfully obvious that every keystroke I enter into my thoroughly hacked and compromised computer and (Verizon) internet connection is mirrored and logged by the Lockheed Martin cyber unit operatives who use highly sophisticated remote-capture technology to spy on this journalist (and no doubt, untold numbers of other citizens) 24/7 -- and TAMPER WITH THEIR CONTENT, EVEN OFF-LINE.


Late yesterday afternoon, the censorship deception took a new twist when I received an email stating that my account was "locked" -- even though a "lock" notice didn't begin to appear on my Twitter page until after I received the email.  The on-screen notice, like the email, made no mention whatsoever of "suspicious" content. Instead, it took a technological tack:


I dutifully clicked on the button and was taken to a page demanding:  "Enter your phone number in the box below, and we'll send you a confirmation code. We will not store your phone number or use it for any other purpose, but text fees may apply."


The message did not ask whether I was supplying a landline or a cellphone number.  Nor did it intially state that the confirmation code would be sent my text message -- a type of message that cannot be received by most landlines.  I entered my home phone number and only than was I informed that the code would be sent by text message.  I am reluctant to transmit my cellphone number via the net because I know with certainty that my connection is not secure -- it continues to be repeatedly hacked, despite password changes (and Verizon has been unable or unwilling to resolve this chronic security issue).


Later, I reluctantly relented and typed in a cellphone number on the webform. Then I got a new surprise: an on-screen message reading: "You have exceeded the number of attempts. Try again later."  I did -- again, to no avail.


It is now more than a day after the Tweet block began with that Jeb Bush tweet, and I still cannot post on Twitter.  Circumstantial evidence, and similar past experiences, inform me that I am being purposely and unconstitutionally censored, my telecommunications intercepted, hacked and altered, by what can only be described as a fascist military intelligence-corporate censorship regime -- and a brazenly ham-fisted one, at that.


I have been forced to give up my cellphone number, opening yet another door for potential identity thieves -- a means for this persecuting regime to "let bad things happen" to their extrajudicial "targets".  But it goes even further: my reporting indicates that this regime intercepts U.S. Mail and counterfeits and alters bills, account records and financial statements of "targeted individuals" and their entire families -- an expropriation scheme that amounts to financial genocide:

It's not just financial genocide; it's a physical, slow-kill genocide as well.  The same categories of citizens who are targeted for fiinancial sabotage (and eventual ruin) also are subject to covert, silent attack via a covert celltower electromagnetic radio frequency directed energy weapon grid that is capable of "no-touch" torture, neuromodulation of physical and mental functioning, even the induction of "subaural suggestion" directly into mind -- heinous subjugation and menticide, a destructive and criminal attack on the brain and the physical and mental well-being of extrajudicially condemned Americans.  THIS CRIME IS EVERY BIT AS HEINOUS AS THAT OF THE GERMAN NAZIS -- perhaps moreso, since the genocide is done silently, invisibly, over time.  I first exposed this American mil-intel genocide more than five years ago:

I will let my readers know when I once again can post to my Twitter account.  But the damage already has been done; I have been censored under false pretenses, and my personal identity information further compromised, by a covert cyberNazi regime that operates illicitly and in flagrant violation of the human and constitutional rights of American citizens.
Posted by Vic Livingston at 2/28/2015 03:36:00 PM 139 comments: